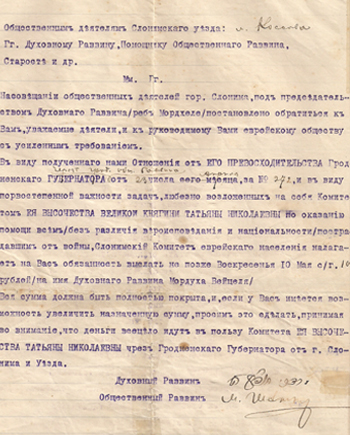 Letter of Appeal, typed in Imperial Russian, to regional government authorities, applying for government assistance to aid Jewish soldiers injured in battle. With signature of R. Mordechai of Ushmina in Hebrew and in Russian.  In 1914, in response to the enormous amounts of casualties sustained by the Russian army, a committee was formed with the objective of assisting soldiers injured in battle. The daughter of the Tsar, Tatyana Nikolaevna served as its patron, and it was thus known as the Committee of Grand Duchess Tatyana Nikolaevna. Wartime regulations forbade any fundraising, without explicit authorization of the government. At that time, Slonim, which was a large and influential Jewish community, had become a central place of evacuation for wounded soldiers and civilians. The Jewish community, which also wished that Jewish soldiers should benefit from the fund, was required to first apply to the local government. To that effect, the Chief Rabbi, the eminent R. Mordechai of Ushmina, sent this letter. In his correspondence he notes that the statute in question, number 272, makes no legal distinction as to the religion of injured soldiers who qualify for assistance. R. Mordechai Wiesel-Rosenblatt (1839-1916) was famous from a young age as both a genius and a tremendous masmid. In addition to great scholarship in the Talmud he was also well known as a great Tzaddik and miracle worker. Thousands, including gentiles, flocked to him for his blessings. He served in various rabbinical positions, but was most well-known for his term as Rav of the town Ushmina. In 1905 he accepted the Rabbinate of Slonim where he was revered by both the Chasidic and and Misnagdic communities. Document of great historical import; signed by one of Russia’s most distinguished rabbinical figures, to the hierarchy of the notoriously antiSemitic Tsarist government. Lot includes professional translation of the entire letter.

Be the first to review “221. WIESEL-ROSENBLATT, RABBI MORDECHAI OF USHMINA” Cancel reply