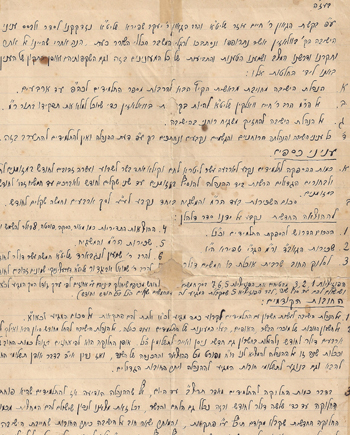 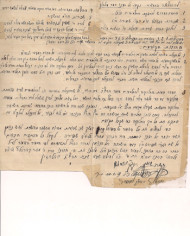 Important arbitration document concerning the administration of the Volozhin Yeshiva; dated 1933. Signed by R. Lazer Yudel Finkel of Mir, R. Moshe Shatskes of Lomza and R. Meir Karelitz. Apparently the yeshiva in spite of having less than 40 students still had administrative issues which had to be adjudicated by the Va’ad Ha’Yeshivos under the aegis of R. Chaim Ozer. This agreement, which offers a rare peek into the administration of a prewar Lithuanian Yeshiva, details all the financial affairs of the Yeshiva, including the salaries of the faculty, repayment of existing loans and the amount of provisions allocated to each student.  The Volozhin Yeshiva, also known as Eitz Chaim Yeshiva, was originally established by R. Chaim of Volozhin in 1803. Having served as a model for all subsequent Lithuanian yeshivas, it has deservedly been called the “mother of all yeshivas”. In 1892, the Russian government demanded the incorporation of a rigorous secular studies program in the Yeshiva’s curriculum. The Netziv famously refused to comply and closed the yeshiva rather than sanction any changes to the Yeshiva’s hallowed curriculum. In 1899, R. Refael Shapiro, the son-in-law of the Netziv, reopened the yeshiva, albeit on a smaller scale, and it came to be known as the “second Volozhin”. It continued to function under the leadership of R. Yaakov Shapiro (son of R. Rafael), and R. Chaim Walkin (son in law of R. Rafael), until World War II. Fair condition. Some holes with some loss of text.

Crude repairs. 21 by 32 cm. Important document regarding the ‘mother of all Yeshivas’ in its twilight years.

Be the first to review “219. VOLOZHIN YESHIVA” Cancel reply