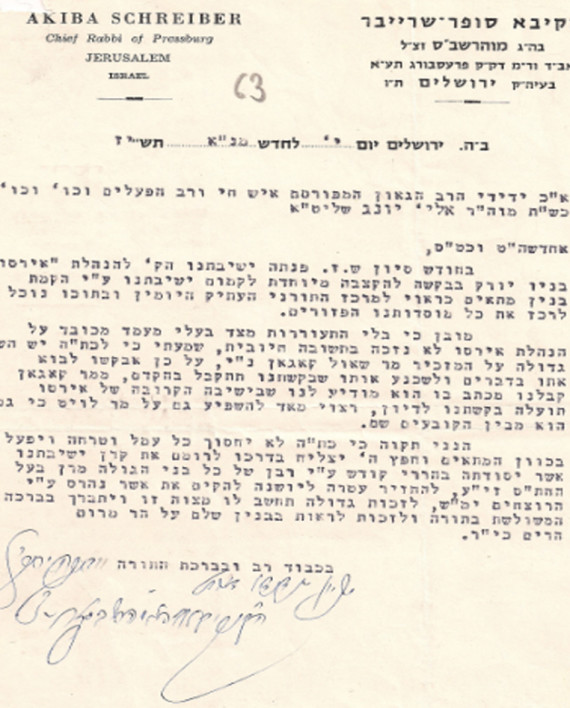 Typed letter signed in Hebrew, dated 1957, to Rabbi Dr. Leo Jung of the joint. Requesting him, to use his influence on Mr. Saul Kagan of the Claims Conference against Germany, for assistance in obtaining a grant, towards the building of the Pressburg Yeshiva in Jerusalem.  The Reparations Agreement between Israel and West Germany was one of the most sensitive and hotly debated subjects in the immediate post Holocaust period. While some survivors maintained that they should accept monetary compensation for Nazi atrocities, others were vehemently opposed. The same was true from a rabbinical point of view. The above letter clearly presents the view of R. Akiva Sofer, a preeminent Torah leader of the generation. R. Akiva Sofer (Da’as Sofer) (1878–1959) was a great grandson of the Chasam Sofer. In 1906 he succeeded his father, the Shevet Sofer, as Chief Rabbi of the great Kehilla of Pressburg where he served until 1938, when he emigrated to Eretz Yisrael.

On personal letterhead, 16 by 24 cm, fine condition. Minor tear to corner of paper not effecting text.