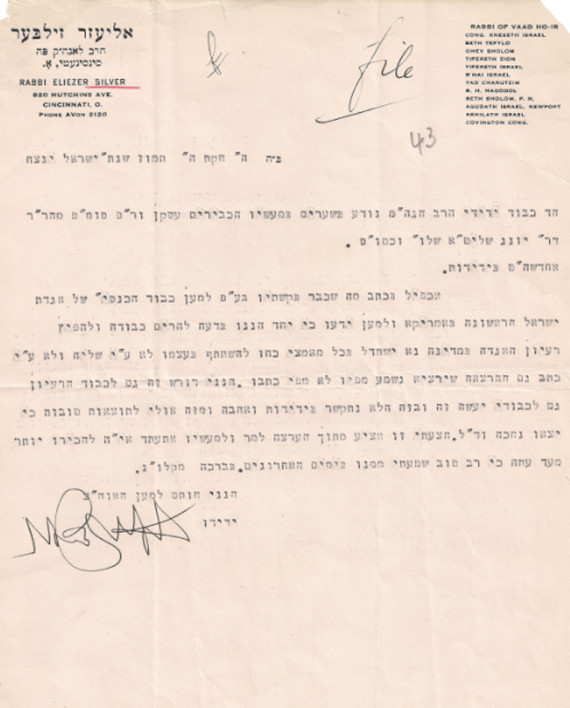 Typewritten letter, signed by R. Silver, addressed to Rabbi Dr. Leo Jung. Dated 1938, R. Silver implores Rabbi Jung to participate personally, and not merely “with a representative or with a letter”, in the upcoming inaugural convention of Agudath Yisrael of America. 

R. Eliezer Silver (1882-1968) was born in Lithuania and studied under R. Chaim Ozer Grodzinski of Vilna, (who granted him Semicha), R. Meir Simcha of Dvinsk and R. Chaim Soloveitchik of Brisk. He immigrated to the United States in 1907, and around 1931 accepted an invitation to become Rav in Cincinnati, where he remained until his passing. Extremely active in the Union of Orthodox Rabbis of the U.S. and Canada (Agudas HaRabanim), of which he was elected president in 1929. He was also a pivotal founder, and president of Agudath Israel of America which apparently in its early years sought the assistance and recognition of prominent orthodox rabbinical leaders.

On personal letterhead. Fine condition, 21.5 by 28 cm with small tears to top corners not effecting text.