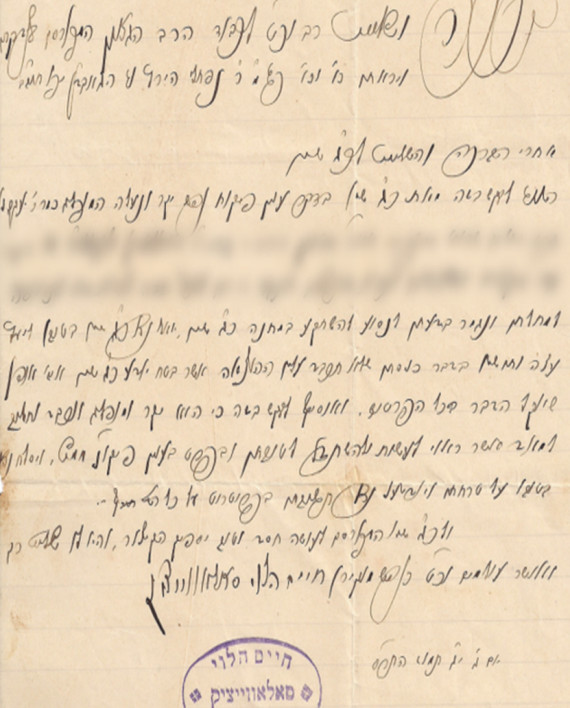 Signed letter by the renowned R. Chaim Soloveitchik of Brisk; addressed to R. Naftali Hertz Ha’Levy, Rav of Yaffo; dated 13 Tammuz 5660 (1910). Solicits assistance for a fellow descendant of the great R. Chaim of Volozhin, R. Yaakov Groisboim of Brisk, who wished to settle in Yaffo. R. Groisboim’s failing health made it necessary for him to relocate to a warmer climate, and, following doctor’s orders, he chose to immigrate to Eretz Yisroel. R. Chaim describes his relative as a most distinguished gentleman, worthy of the highest regard, especially so in light of his life threatening condition. In concluding, R. Chaim asks that R. Naftali Hertz write back immediately to apprise him of the situation and closes with warmest regards. [See Avi Ha’Yeshivos (Jerusalem 2012) page 607 which traces the (Chasidic) Groisboim family’s ancestry to R. Chaim Volozhiner and details their special relationship with the Soloveitchik family.] 

R. Chaim Halevy Soloveitchik known as R. Chaim Brisker, (1853- 1918) was a great Talmudic scholar and founder of the popular ‘Brisker’. approach to Talmud study; a method of highly exacting and analytical study that focuses on precise definitions and categorizations of Jewish law, with a particular emphasis on the Rambam. Following many years as a senior lecturer in the renowned Volozhiner Yeshiva, he succeeded his father as Rav of Brisk. His primary work, Chidushei Rabbeinu Chaim Halevy, a volume of insights on Mishnah Torah, was published posthumously by his sons and is a fundamental text studied in all Lithuanian Yeshivas. Additionally, R. Chaim, whose epitaph describes him as Rav Hachesed (master of charitable generosity), was also intensely involved in charitable endeavors, literally giving all he had to assist the needy, and this document is but a small sample attesting to this facet of R. Chaim’s enduring legacy.

Fine condition. One ink stain and very minor damage to edge of paper. 21 by 28 cm.