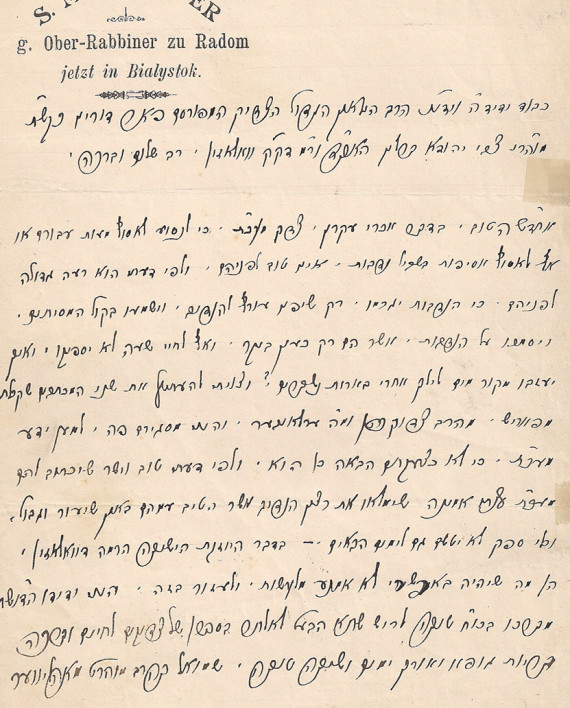 Autograph letter, on personal letterhead, by R. Shmuel Mohilever to R. Naftali Tzvi Yehuda Berlin (Netziv). Dated 1889, it concerns the well-known shmitta controversy in Moshav Ekron/Mazkeret Batya.  In 1882, with the persuasion of R. Mohilever, Baron Rothschild undertook a daring experiment financing a group of ten successful farmers (and one melamed) from the Russian village of Pavlovka. They traveled to Palestine with the goal of creating a new agricultural community in the Holy Land. With the arrival of shmitta, an issue arose that evolved beyond a halachic question into a struggle between worldviews. A major point of contention was the Baron’s insistence that the settlers utilize the controversial heter mechira which provided a way to circumvent the shmitta laws. The settlers refused to acquiesce. The resulting controversy was closely followed by the Diaspora who knew that the future of the new Yishuv was heavily invested in the outcome. Ultimately, the farmers prevailed and kept shmitta with all its stringencies, however they had paid a heavy price – in poverty, illness and the loss of the good will of Baron Rothschild. Of particular interest is that this letter to the Netziv (who had forbade the use of the heter) was written at the close of the shmitta year and discusses the farmers’ future support. Rabbi Mohilever (who had supported the use of the heter) writes that he concurs with the Netziv that it would be wise to mollify the Baron and request his continued support. Other efforts at raising funds for the sustenance of the farmers would be futile.

In concluding, he assures the Netziv that he will continue to assist the Volozhin Yeshiva. For an extensive history of the subject see Sam Finkel, Rebels in the Holy Land (Jerusalem 2012).

Be the first to review “197. MOHILEVER, RABBI SHMUEL” Cancel reply