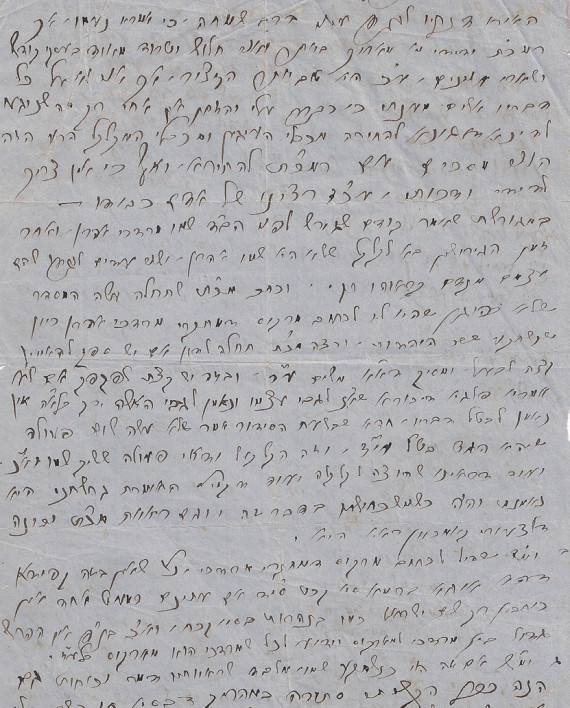 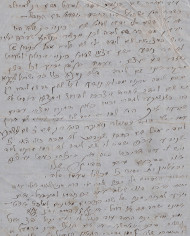 Lengthy autograph halachic responsa by R. Tzvi Hirsch Kalischer, written to Rabbi Yosef Zechariah Stern of Shavel. Dated 1873, the letter is a response to a halachic query posed by R. Stern concerning the case of a husband who attempted to invalidate a Get by claiming that he had not provided the officiating Beis Din with his correct name. 

R. Tzvi Hirsch Kalischer (1795-1874), was a prize student of R. Yaakov of Lisa, author of Chavas Da’as, and R. Akiva Eiger. He served as Rabbi in the community of Thorn for over 40 years and famously refused any remuneration, being supported instead by means of a small business run by his wife. He authored numerous scholarly works, including Drishas Tzion, published in 1866, in which he outlined his ideas for Yishuv Eretz Yisrael both from a halachic and a practical point of view. He is widely considered to have been one of the most influential personalities behind the founding of the new Yishuv. 

R. Yosef Zechariah Stern (1839-1904) was one of the leading rabbinical leaders of his generation and author of many highly acclaimed works. His writings, which encompass a wide spectrum of Torah literature, are renowned for their great erudition and reveal some of the breadth of his encyclopedic knowledge. Additionally, his opinion on complex halachic issues was often sought after, and many of his responsa are included in his multivolume Zecher Yehosef.

14.4 by 22 cm. Double-sided. Fair condition; some small tears and markings with crude tape repairs on top and bottom.