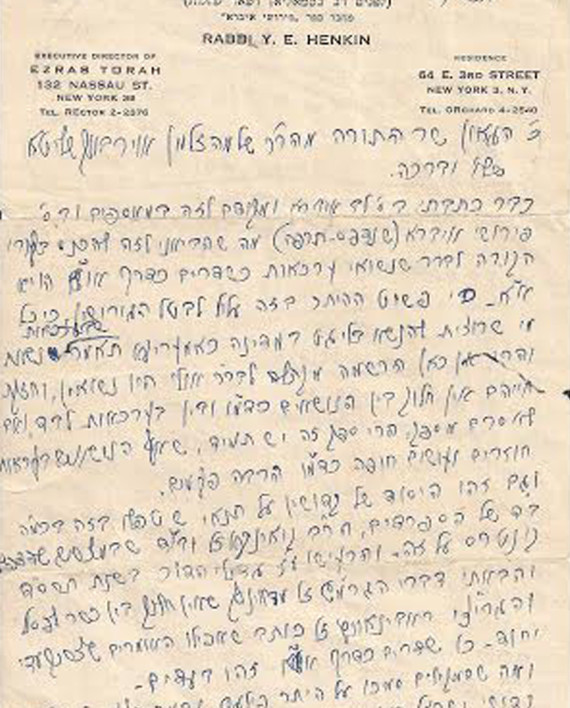 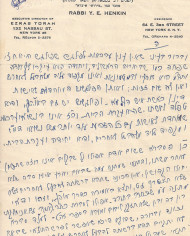 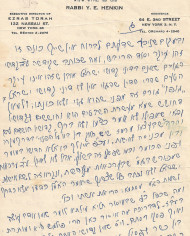 One of Rav Henkin’s most well-known halachic positions, which caused a great stir in rabbinic circles, was his opinion that civil and reform nuptials are a form of common law marriage and thus require a halachicly sound Jewish divorce (get).With a lengthy halachic discourse on the topic with corroborations spanning the breadth of Talmudic literature this is an extremely important correspondence of perhaps R. Henkin’s most famous and most oft disputed responsa. See Peirushei Ivra, Kisvei Ha’Rav Henkin, Vol II page 120, Igros Moshe Even Ha’Ezer Vol I: 75 and 76 and Vol II: 19 where R. Moshe Feinstein writes that although he disagrees halachicly, however in deference to R. Henkin’s opinion if possible one should issue a Get. For an extensive article on the topic see Tradition, Vol. 21, No. 3 (Fall 1984), 7 – 39; “Reform Marriages in Contemporary Halachic Responsa,” by R. Norman E. Frimer and Dov I. Frimer. R. Yosef Eliyahu Henkin (1881- 1973) was born in Klimavichy, and studied at the Slutzker Yeshiva under Rav Isser Zalman Meltzer. Known from a young age as brilliant and extremely diligent, he received Semicha from R. Meltzer, as well as from R Yaakov Dovid Wilovsky (Ridvaz), R. Boruch Ber Leibowitz and R. Yechiel Michel Epstein (Aruch Ha’Shulchan). After serving as Rav in a number of Russian towns, he immigrated to America in 1922. Upon arrival he was quickly recognized as one of the preeminent Poskim in the U.S.A. renowned as a tremendous Talmid Chochom as well as great Tzaddik. In 1925 he became the director of Ezras Torah, directing the distribution of millions of dollars assistance to the needy, although he personally lived extremely frugally.