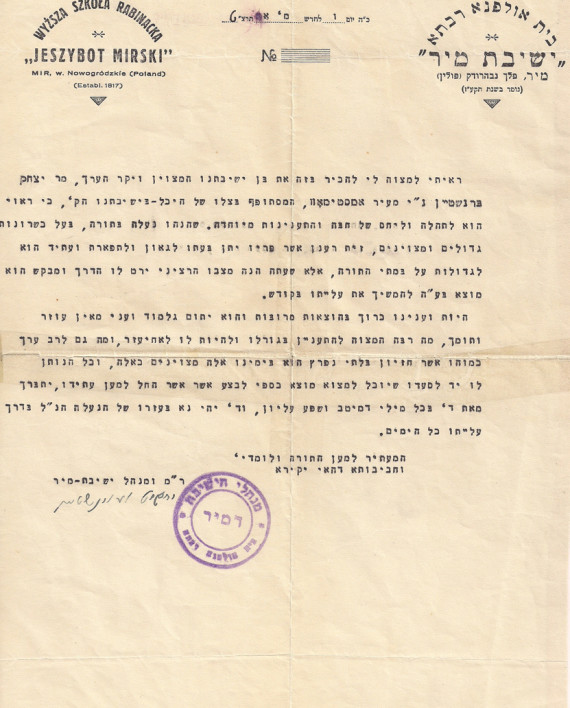 Typed recommendation letter signed by the legendary Mashgiach, R. Chatzkel Levenstein, requesting assistance for Yitzchak Bernstein, a student of Yeshivas Mir, and attesting to his greatness in Torah. R. Bernstein (or “the Amstibovyer”) went on to become a prestigious rosh yeshiva, heading the Etz Yosef yeshiva in Jerusalem, and author of the multi-volumed He’oros on Gemara.

R. Yechezkel [‘Chatzkel’] Levenstein (1895-1974) was one of the pre-eminent Mussar giants of his generation. Orphaned at a young age, he studied first in Lomza, then in Radin under the Chofetz Chaim, and finally at the flagship mussar yeshiva in Kelm. He served as Mashgiach at the yeshivas of Kletsk and Mir in Lithuania, and then Yeshivas Lomza in Petach Tikva. Following the passing of the legendary Mirrer Mashgiach, R. Yeruchum Levovitz, R. Chatzkel was called back to the Mir to serve as Mashgiach. Together with the other leaders of the yeshiva, he led Yeshivas Mir through its tumultuous exile in Shanghai. After the Holocaust, he traveled with the Mirrer Yeshiva to America but shortly thereafter he returned to Eretz Yisrael where he assumed the post of Mashgiach in the Ponevezh Yeshiva in Bnei Brak. On Mir Yeshiva letterhead. 21 by 29.5 cm. Fine condition; some folds reinforced with tape; one small stain.