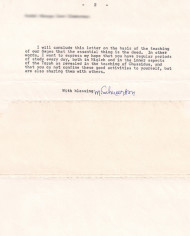 Signed letter in English, dated 1965, in response to a scientific query posed by a scholar in New York. The Midrash relates how the seventy elders were chosen out of seventy two candidates with ultimately the most worthy being selected. The point in question was, would the application of the theory of probability to the selection process be permitted “in order to thereby emphasize the magnitude of the miracle in that those who had been preordained to be selected actually drew the proper designation”? In his lengthy and erudite reply the Rebbe writes, that “clearly that is quite permissible to make this application and use this approach. The theory of probability, which is based on rational foundations, and similar scientific principles have a recognized status in the Torah. Moreover… all sciences can and do only claim the validity of probability but not of absolute truth, and this is not because science has not yet advanced sufficiently but because of the very “nature” of science which can work on and produce only theories.” 

R. Menachem Mendel Schneerson (1902–1994), one of the most influential Jewish leaders of the twentieth century, was born in the town of Nikolaev-Russia to R. Levi Yitzchak and Rebbetzin Chana Schneerson. Known as a genius, by the time he was seventeen, he had mastered the entire Talmud, and went on to receive rabbinical ordinations from R. Yosef Rosen – the Rogatchover Gaon – and R. Yechiel Yaakov Weinberg – the Sreidei Aish. In 1928 he married the daughter of the sixth Lubavitcher Rebbe, R. Yosef Yitzchak Schneerson, whom he ultimately succeeded as Rebbe. In this capacity he tirelessly dedicated himself to world Jewish outreach and he succeeded in establishing Chabad centers all over the world.

Excellent condition, some folds on second page. With original envelope. Extremely important letter (seemingly unpublished) on the relationship between Torah and Science, from one the Twentieth Centuries most notable rabbinic leaders.