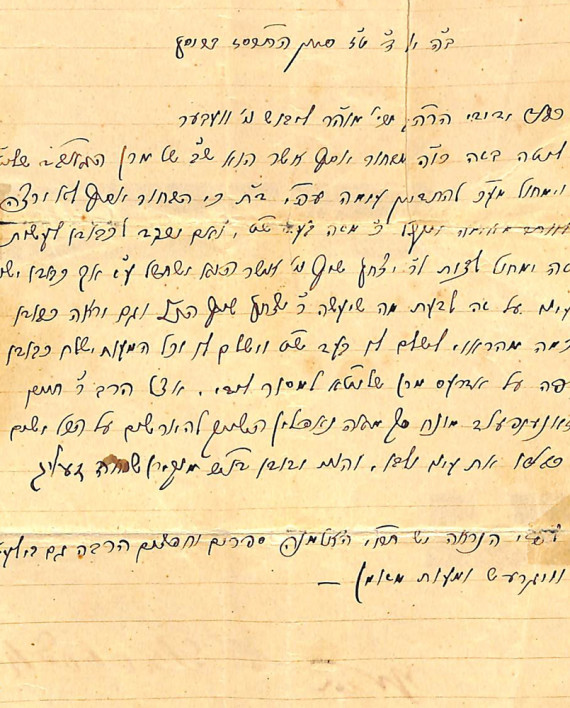 Autograph letter, dated 1907, by the legendary Dayan of Brisk; addressed to R. Leibish Weber, Dayan in Jerusalem (father of R. Moshe Weber and Father in law of R. Amrom Blau) and fellow protégé of R. Chaim Soloveitchik of Brisk, referring the case of a young man’s disputed inheritance for R. Weber’s adjudication. R. Simcha Zelig mentions that the claimant, a young man named Yosef Asher, is a relative of R. Chaim of Brisk, and asks that all the proceeds be forwarded to R. Chaim’s address. R. Simcha Zelig further notes that certain items pertaining to the case are to be found in the care of R. Yosef Chaim Zonenfeld.  R. Simcha Zelig Reiger (1864-1942) studied under the illustrious R. Y.L. Diskin, and later under R. Chaim Soloveitchik as a student in the Volozhin Yeshiva. With the passing of R. Yosef Dov Soloveitchik, the Bais Halevy, in 1892, his son R. Chaim was offered the position as Rav of Brisk, and R. Chaim agreed on the condition that R. Simcha Zelig would accompany him to serve as the Dayan of the city. R. Simcha Zelig served with great distinction in this capacity, and was renowned as one of Lithuania’s foremost halachic authorities until his tragic martyrdom in the Holocaust.

Fair condition, some folds and creases with small repairs.