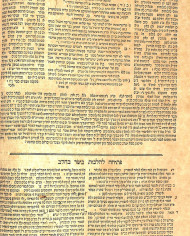 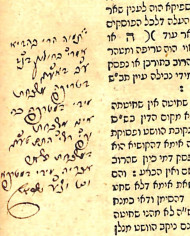 Shulchan Aruch Yoreh De’ah with commentary of the Pri Megadim, containing
over 140 lengthy unpublished glosses of R. Yisrael Lipschitz, author of Tiferes
Yisrael. Lemberg 1824.
This volume, which recently surfaced in a private library, contains the first part
of Shulchan Aruch – Yore De’ah, encompassing the dietary laws starting from
shechita (ritual slaughter) through ta’aruvos (forbidden mixtures of meat and
milk), published with the important dual commentary of the Pri Megadim.
The many handwritten glosses of R. Yisrael Lipschitz, which are scattered
throughout the sefer, focus in particular on the laws of treifos (lesions), with
over 90 glosses, and the laws of ta’aruvos, with over 25 glosses, and pertain
both to the Shulchan Aruch as well as the Pri Megadim. The detailed glosses
contain many scholarly comments of original insight, and are certain to
command the attention of Torah scholars the world over upon publication.
The handwriting of the Tiferes Yisrael leaves no doubt as to his authorship of
these glosses, and the signature of the author, “Yisrael”, is appended to one of
the glosses in the laws of treifos.
? R. Yisrael Lipschitz (1782–1860) was born into a distinguished rabbinical
family – his father was R. Gedalia Lipschitz, author of Regel Yeshara, and
his grandfather was R. Yisrael Lipchitz, Rav of Cleves. He served as Rav,
first at Dessau and then at Danzig. Famed for his outstanding scholarship,
he was a prolific author who wrote many important works. His most wellknown
work is Tiferes Yisrael, a classic already in its author’s lifetime, is
often considered to be one of the clearest and most useful commentaries
on the Mishna. Additionally, he was renowned as a great tzaddik who led an
ascetic lifestyle, frequently fasting while studying and praying incessantly.
Hitherto unknown, these annotations present a glorious addition to the
world of Torah scholarship in general, and to the scholarship of the Pri
Megadim and Tiferes Yisrael in particular.
Vinograd Lemberg 429. Fine condition. 149 pages, 37 cm. Modern binding,
worn spine.